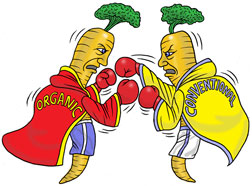 Organic foods are those that are produced using methods that do not involve modern synthetic inputs such as pestisides and chemical fertilizers, do not contain GMOs, and are not processed using irradiation, industrial solvents, or chemical food additives.

FACT: For the vast majority of human history, agriculture can be described as “organic”; only during the 20th century was a large supply of new synthetic chemicals introduced to the food supply. The organic farming movement arose in the 1940s in response to the industrialization of agriculture known as the Green Revolution.

Processed organic food usually contains only organic ingredients. If non-organic ingredients are present, at least a certain percentage of the food’s total plant and animal ingredients must be organic (95% in the United States, Canada, and Australia) and any non-organically produced ingredients are subject to various agricultural requirements. Foods claiming to be organic must be free of artificial food additives, and are often processed with fewer artificial methods, materials and conditions, such as chemical ripening, food irradiation, and genetically modified ingredients. Pesticides are allowed so long as they are not synthetic.

Organic certification is a certification process for producers of organic food and other organic agricultural products. In general, any business directly involved in food production can be certified, including seed suppliers, farmers, food processors, retailers and restaurants. Requirements vary from country to country, and generally involve a set of production standards for growing, storage, processing, packaging and shipping that include:

In some countries, certification is overseen by the government, and commercial use of the term organic is legally restricted. Certified organic producers are also subject to the same agricultural, food safety and other government regulations that apply to non-certified producers.

We love Wikipedia! http://en.wikipedia.org/wiki/Organic_certification  Not this below we found by google images…speaks for itself, a great chart to see the differences!!!